The convection oven is one of the most popular appliances for chefs who want to make healthy meals fast.

This type of oven uses internal fans, which circulates air around the food so that it heats and cooks evenly.

The goal is to avoid unwanted hot and cold areas that can make cutting into a chicken or taking a bite of vegetable unpleasant.

Out of the many convection ovens on the market, one of the best options is the Infinity Turbo.

In this Infinity Turbo Convection Oven review, we’d look at just what makes this model so excellent and what kind of features it has to make it stand out from the crowd.

The Infinity Turbo Convection Oven is an easy option produced by Infinity and designed to cook up to 50% faster compared to conventional ovens.

This model first became available in 2019 and has rapidly become one of the most popular energy-saving choices for the average individual interested in making healthier food.

While, at first, it does not seem spectacular, what’s certain is that it cooks more rapidly than other convection ovens. It even has some special features that help it to stand out. 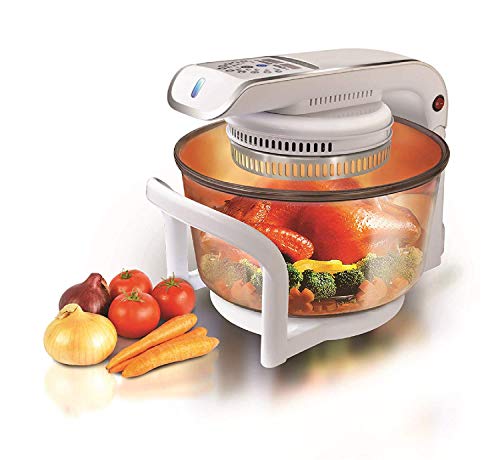 Who Is This Product For?

There are several key groups the Turbo Convection Oven is intended for.

For example, it works well for those who would like to make healthier food choices because it uses air to cook evenly as opposed to oil when frying.

This oven is also designed for those who want full meals, such as an entire roast chicken, cooked rapidly because it completes food in half the time of a conventional oven.

Besides these basics, it works well for people who want to be able to check on their food without opening the appliance.

The full cooking area is translucent, so it is easy to see how well the food is being heated and prepared.

In terms of price, the Infinity Turbo would be considered mid-range.

Still, the extra cost goes into technology and the rapid cooking speed, so you have to worry less about breakdowns and repairs.

Perhaps, best of all, the Infinity Turbo is small and compact and can be used in apartments, cramped houses, and even campers and mobile homes.

It is always important to see what is included with a convection oven because some manufacturers will try to be cheap and skimp out on essential features.

When you buy the Infinity Turbo, you get the halogen-infrared convection oven, a transparent tempered glass lid, and a heat-resistant glass bowl.

This is definitely one of the simpler options on the market, which is part of why it is so popular.

The Turbo is easy to set up and really just needs to be wiped down and then plugged in to be used.

It is recommended you work the hinges a little so that they stop squeaking from disuse.

While it is not clear from the packaging, the Infinity Turbo does need to be plugged into a standard outlet as its main power source.

It does not use gas and is electric, so keep this in mind when trying to set the oven up on a counter or in a similar area.

Overview of the Features

There are many included features that make the Infinity Turbo one of the most recommended convection ovens on the market.

One of the most significant is the 10 preset auto-cooking selections, which take the guesswork out of preparing favorite dinners like chicken breast, pork chops, roast potatoes, and even steamed vegetables.

One final essential feature is the LCD display, which is straightforward, bright, and accurate.

Unlike some traditional convection ovens, the Infinity Turbo has hinges, which allow the user to remove the lid.

A handle near the bowl makes it easy to pull out food once it is prepared, as well as to adjust the settings as needed.

This unit is definitely easier to clean than other options because the separate parts can be removed, cleaned, and then reinstalled.

If there is one weakness to this model, it is the plastic used for the handle and main cooking area. This plastic is somewhat weak and brittle and can be difficult to clean when covered with grease.

How to Get the Most Out of It

There are several things you can do to get the most use out of the Infinity Turbo, but the most significant is by keeping the entire oven clean and free of buildup, crumbs, grease, and debris.

To properly clean your Infinity Turbo, remove the translucent glass bowl and lid after preparing food. These parts can be cleaned with soap and water and should be thoroughly rinsed and dried.

To clean the plastic portions of the convection oven, it is a good idea to use a warm, damp cloth to weaken grease and dislodge food.

When used properly, there shouldn’t be any food or liquid on the plastic, but it is always a possibility.

Individuals often forget they will have to adapt their recipes for regular ovens to the convection model.

The first step is to adjust the temperature to 25 degrees Fahrenheit lower than the traditional recipe calls for.

The food will also be cooked more rapidly, usually 25% faster than expected.

With the Infinity Turbo, food is completed in about half the time of a traditional oven, so you need to adjust the cooking time and expect the food to be completed in a shorter amount of time.

When using the Infinity Turbo, it is possible to cook a broad range of options without compromising the integrity of the oven.

The easiest type of food to prepare is basic meats like beef, chicken, and pork chops.

However, models like the Turbo are also designed to prepare vegetables and the like by perfectly roasting or steaming them.

The Infinity Turbo does not come with a cookbook like some options, but you should still be able to cook many of your favorites without difficulty.

There are several convection ovens on the market that are similar in design to the Infinity Turbo and come with their own set of advantages, disadvantages, and quirks.

One of the most popular alternatives is the Costway Infrared Halogen Convection Oven.

It includes many of the features that make the Turbo popular, such as the translucent bowl and lid, white plastic design, and rapid halogen cooking. 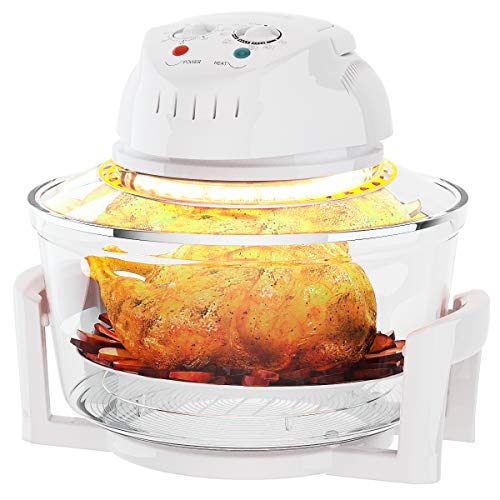 However, the Costway model is half the price and comes with tongs, a wire extender, and a cooking rack.

Due to the lower cost, it is missing some of the features that make the Turbo popular, including the hinged design and the easy cleaning.

Another popular choice for chefs of all experience levels is the Nutrichef Infrared Convection Oven.

This model, once again, uses a halogen design to rapidly prepare foods of all types but is more powerful than the Infinity Turbo. 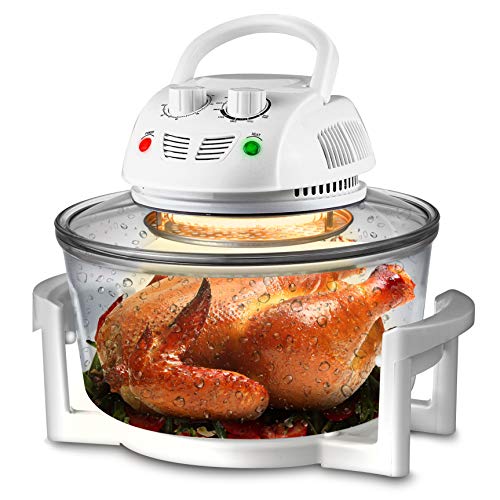 It is primarily used for air frying but is also great for roasting and creating quick, healthy meals that are chocked full of flavor.

The Nutrichef has much in common with the Infinity Turbo, including the translucent bowl and lid, the white plastic design, and multiple cooking settings.

On average, the Nutrichef is more powerful but also more difficult to clean, making it a good choice for someone who is willing to invest more money.

One final option that is similar to the Infinity Turbo is the Classic Cuisine Convection Oven.

This model also boasts a basic translucent bowl and lid design with a hinged top and rapid cooking accomplished through the use of halogen and infrared technology. 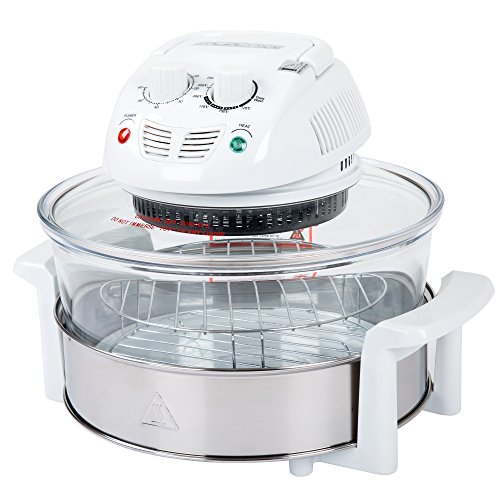 The Classic Cuisine is excellent because it is super energy-efficient and able to cook even thick chunks of meat rapidly without burning or uneven cooking.

This is another inexpensive model that is great for people who would like to save money while still eating healthy, but there are some major drawbacks.

For example, the Classic Cuisine does not have as many cooking options as the Infinity Turbo and is also more difficult to clean.

The thermostat also has fewer temperature settings, and the timer will only go to 60 minutes.

Overall, this is a decent inexpensive model that lacks the flexibility of the Infinity Turbo.

This Infinity Turbo Convection Oven review showed that this model is an excellent choice for individuals who want a mid-range option for countertop cooking.

It prepares food more rapidly than conventional ovens and even faster than other convection models, making it great for someone who wants healthy meals in as little time as possible.

Overall, it is a great option and can be used in apartments, cramped homes, and even in campers as long as it is plugged in and not a fire hazard.